Play Ball! Chicago Faucets Pinch Hits and Slams a Home Run with the Boomers at the Wintrust Field Suites

Chicago Faucets got the call to pinch hit when the owners changed their minds about using sensor faucets in the renovation projects for their bathrooms in their Wintrust Field suites.

“Originally we looked at sensor faucets,” said Boomers Vice President and General Manager Michael Larson, “but they didn’t seem to fit. Besides, there was a supply chain problem as in many cases these days. I knew about Chicago Faucets and told the construction team to look into them.”

Wintrust Field is a stadium in Schaumburg, Illinois, previously known as Boomers Stadium or Alexian Field. It is home to the Schaumburg Boomers of the Frontier League who began playing there in May 2012. The Boomers captured the first-ever professional baseball championship for Schaumburg in 2013.

The Stadium’s capacity is 7,000 for baseball and 10,000 for concerts. Larson, formerly of the Idaho Falls Chukars and Fargo-Moorhead RedHawks organizations, brought a new level of engagement since arriving in 2018 as General Manager.

“Due to the global pandemic, the 2020 season was suspended,” Larson said, “but we opened the stadium as an outdoor dining option and held a socially-distanced 4th of July fireworks show in the West Parking Lot. We were selected to be the Training Site for the Chicago White Sox Taxi Squad for the MLB 2020 season. We’ve been busy, and it was important for us to upgrade our suites for our fans.”

Yasmin Rodriguez, the facilities project technician who managed the project for the Village of Schaumburg, says that it was last year, 2021, when the village approved a capital improvement project. The project encompassed enhancements at the Boomers Ballpark, including the bathrooms of the suite level.

“When the sensor faucets were rejected, we wanted to come up with
something reliable,” Rodriguez explained. “Our maintenance crews –
we have a lot of buildings in Schaumburg – said Chicago Faucets are
in many of these buildings, so we looked into them.”

The models selected were Chicago Faucets metering faucets model 802-665ABCP. These are deck-mounted, manual sink faucets with 4” centers and pressure compensating aerators at 2.2 GPM (gallons per minute). Their vandal-proof handles make them ideal – and aesthetically pleasing – for the project.

“We worked with the general contractor to put them in all suites, each of which has two men’s and two women’s bathrooms,” said Rodriguez.

F.H. Paschen was the general contractor managing this project for the village, and Carlee Appelbaum was the project engineer from Paschen.

“Our company has more than three decades working in construction,” said Appelbaum, “and we work closely with the Village of Schaumburg on a variety of projects. We were contacted by the village for these suite-level bathroom renovations, but the faucets were not really specified. We just knew they did not want the sensor faucets.” 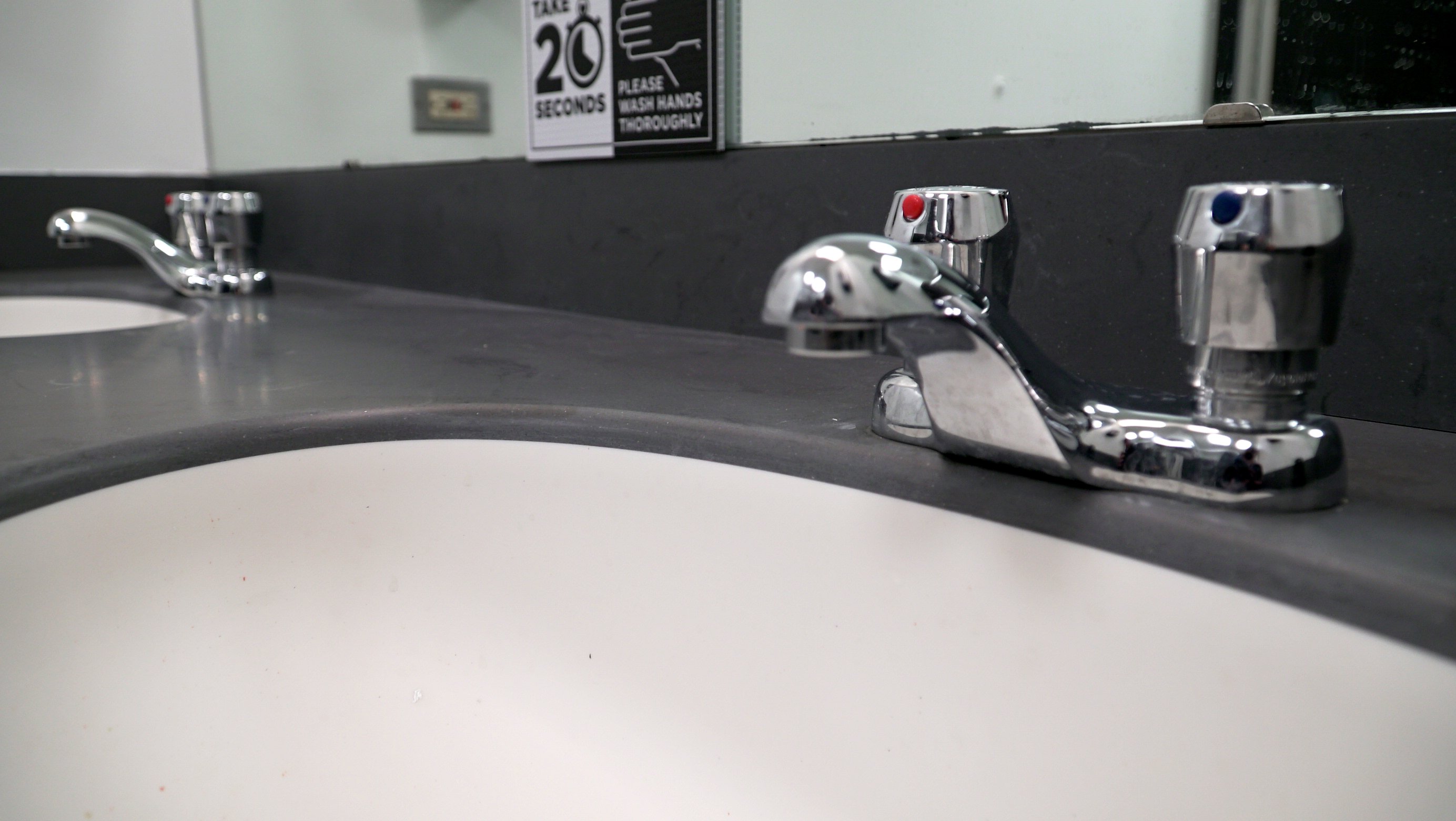 Appelbaum pointed out they worked with Jensen Plumbing and Heating out of Woodstock, Illinois, and decided to go with Chicago Faucets. “There was no electrical running into the bathroom either,” she added. “Jensen submitted the recommendation for Chicago [Faucets] working directly with the owner.”

Fred Learman, VP of the Plumbing Division at Jensen, also served as the project manager for this work.

“We were responsible for the faucets on this renovation project,” he said. “The owner wanted upgrades in the suites and asked us to provide the new faucets. After we gave them cut sheets on the sensor ones, they didn’t care for the looks and wanted to go with metering. We gave them a couple of different options, and they picked Chicago [Faucets].”

Jensen said that 30% to 40% of his work is installing Chicago Faucets. “Most of our work is plan and spec, but in design build projects like this, we have the opportunity to work closely with the owner and general contractor.”

“It’s a team effort, just like baseball,” Larson said. “And we wanted everything ready for opening day.”

“Chicago [Faucets] is one of the go-to brands,” Jensen added.
“It’s a solid, dependable faucet.”

The “customer experience” is something you hear a lot about, and in baseball, it’s really no different Larson pointed out. “While fans are here to enjoy the game, there are the inevitable restroom breaks. And when you are offering suites for events at those games, the restrooms better function,” he said.

Whether aesthetics, easier maintenance or personal preference, the renovated suites at Boomers Ballpark will be there to enhance the fan experience. And so will Chicago Faucets.

© 2018 Chicago Faucets - All rights reserved. All product specifications subject to change without notice.